The Tesla Powerwall is Packed With Powerful Features

The Tesla Powerwall is quickly becoming a household name among those who prioritize living a green lifestyle. When combined with a panel setup, it allows individuals to take their commitment to solar energy to the next level. This is thanks to its feature-packed technology and ability to provide in-depth insights into energy usage.

Whether you’re totally new to solar power or a veteran looking to improve their current setup, the Powerwall is sure to leave you feeling impressed.

In this post, we’ll fill you in on some of the Tesla Powerwall’s most noteworthy features and what they can do for your household.

The large majority of homeowners are on a “time of use” plan with their utility company. These plans charge customers more money during high energy use times as a way to maximize their profits.

If you fall into this group, you’ll be thrilled with the money-saving power of the powerwall’s time-based control feature. When you turn on time-based control, your powerwall will smartly charge and discharge based on your energy use patterns.

During the times where you’re using the most energy, and likely to be charged more by the utility company, the powerwall will discharge its stored energy - saving you from getting charged a jacked-up rate.

The powerwall will charge during times when you’re using the least amount of energy and likely being charged a lower rate by the utility company. It’s able to discern this through its continuously running energy forecast feature that monitors your usage patterns.

The energy forecast is useful for more than just smartly charging and discharging energy. It allows powerwall owners to see details of their energy production with more detail than was ever possible before - which gives insight into how one can work to improve their level of sustainability even further.

Best of all? The data can be accessed right on your phone or other smart device anytime you want to peak at what's going on with your energy production or usage patterns.

Backup Power That Beats Even the Best Natural Gas Generators

Over the course of this past decade, solar panels have grown more reliable than ever before - but they’re not invincible just yet.

Grid-connected solar technology on its own leaves homeowners just as susceptible to power outages as those without solar panels. Unless you have a backup power system like the Tesla Powerwall ready to go.

When you consider the facts about backup power sources, the powerwall is the clear winner when compared to “traditional” emergency power sources like generators that run on natural gas.

When used in conjunction with solar panels, the backup power bank is charged with clean energy, allowing homeowners to avoid having to revert to relying on fossil fuels during power emergencies. And when installed in accordance to the manufacturer's recommendations, the powerwall can keep your home and its appliances up and running for an entire week!

That level of security is hard to match.

The Tesla Powerwall can even be synced to the National Weather Service to determine when severe weather may be approaching your area.

When it senses that a homeowner may be at risk of a power outage, it charges up its energy bank to maximum capacity. When the risk dissipates or passes, your powerwall will return to its previous setting.

You won’t have to worry about this feature activating whenever there are rain clouds. It is typically only kicked into activation when a storm severe enough to potentially knock down power lines is approaching.

You can tweak what triggers this setting directly from the mobile app.

These are just a few of the Tesla Powerwall’s features that you’ll have to look forward to, but even if they were the only ones - the powerwall would still be a worthy investment when it comes to increased savings and energy security.

Want to learn about everything that the Tesla Powerwall brings to the table? Don’t miss out on the guide that we’ve created! 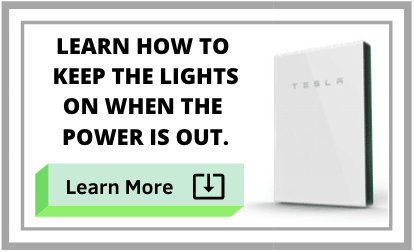